FOREHEAD PAIN AND TREATMENT BY SHOLES 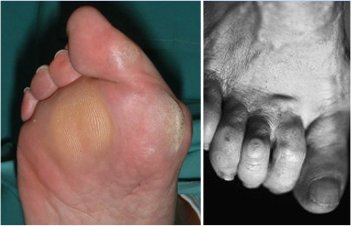 They are due to a poor distribution of support at the level of the metatarsal heads,

In this article, we are interested more particularly in the treatment of median metatarsalgia of mechanical origin, that is to say increasing on exertion.

This syndrome follows instability of the metatarsophalangeal joint linked to an imbalance in the flexor and extensor muscles of the toes leading to stretching and then rupture of the plantar plate.

It is common to find in the literature that median metatarsalgia can be relieved by a retro-capital element (behind the painful heads) such as an “ARC” (Retro-Capital Support) also called “pelotte”. By restoring support behind the painful area, the pressure under the metatarsal head is reduced, in addition to the pain.

It is an element commonly used in podiatry-orthopedics which has its interest since it will also participate in the fight against sagging of the transverse arch, as well as in the elongation of the toes.

The properties of this element nevertheless have their limits.

These images represent the evolution of the deformation of the second ray (second metatarsal and its three phalanges). For reasons of simplification, the first ray has been voluntarily removed (as well as the lumbric and interosseous muscles). On each of the images appear two arrows and a red point: the upper arrow corresponds to the extensor of the toes, the lower arrow to the flexor of the toes and the red point to the articular center of the metatarsophalangeal joint.

These images show that when the toe claw begins to settle, the path of the plantar flexors will change and eventually pass over the joint center. As a result, all of the muscles (the extensors and all those who originally fought against toe claw with flexors, earthworms and interossei), begin to participate in the toe claw.

When the toe flexor and the toe extender pass over the joint center, ARC (Retro-Capital Support) is no longer effective on the toe claw. This is especially true when the claw is attached.

The CRA’s other property is to raise the metatarsal palette.

According to the initial morphology of the forefoot (convex, concave, flat), according to mechanical constraints and muscular tensions, according to the degree of reducibility of the metatarsophalangeal joint, it is not uncommon to observe during handing insoles that the ARC is very suitable for some patients and much less for others, the latter going so far as to describe the element as annoying. ARC is therefore not supported in the same way depending on the patient.

If the discharge from the metatarsal head is not possible with the ARC, it is possible to perform a specific discharge located under the painful area. There is then a recess filled with a damping material to absorb the excess pressure. The painful area is thus discharged.

Various studies have shown that these two elements (ARC or localized discharge) can be used to relieve forefoot pain.

But the most interesting thing is to note that pain relief is mostly improved with the management of the associated static disorder. The correction of a valgus or varus foot, associated with the installation of an element which will discharge the forefoot, will clearly reduce, even make disappear the pains of the forefoot.

ACHILLES TENDINISM AND TREATMENT WITH SOLES
Scroll to top