In the preamble, it should be understood that the terms, which are going to be used, very often group together the same thing, that is to say pain of plantar stretching of all the elements which come to be inserted at the posterior part of the calcaneus (heel bone).

However, a distinction can be made according to the inflammatory stage. Namely: plantar fasciitis (or plantar aponeurosis) relates more to the fascia in its middle part, while calcaneal enthesopathy (or myoaponeurosis or plantar tendinoaponeurosis) finds its origin at the level of its insertion at the posterior part of the calcaneus. Common parlance speaks of heel spurs in particular.

The pathogenic process is explained by the excessive tensioning of the plantar fascia (fibrous membrane located between the heel and the forefoot) which will create micro trauma at the level of its infra-calcaneal insertion, inflammation will then to be created with the formation of bone cells which will lead to a thorn-shaped growth, the latter being able to be diagnosed on radiography.

The pain is very sharp, described by patients as a tear in the heel which, over time, may radiate under the foot and behind the leg.

Note that calcaneal enthesopathies are generally of mechanical origin (sometimes inflammatory in the context of ankylosing spondylitis, for example).

The mechanism of this pathology is the stretching of the fascia.

Knowing that the maximum extensibility capacity of a fascia is only 2%, unlike tendons (10%) and muscle fibers (20%), it is easy to imagine that the first fibrous structure that will suffer during the unrolling of the foot on the ground, it is the aponeurosis.

This distinction between the different morphotypes of feet is important, since a valgus foot is rather considered as a soft foot which will generate an excess of valgising push during the plantigrade phase. As the gap between the heel and the forefoot is at its maximum, the fascia is inflamed.

A hollow foot is a contracted foot, the inflammation will be more localized on the tendons.

Achilles hypo extensibility and retraction of the Sural Triceps (calf muscles) will participate in aponeurotic stretching. We then speak of a retracted achillary tricipito system on the plantar. In combination with static disorders, the tension of the fascia will be increased.

The mode of footwear is also a favorable factor.

There are several ways to treat plantar fasciitis or a heel spur.

This pathology being of mechanical origin, the first way to treat that must come to mind is mechanical treatment with suitable orthopedic insoles.

The plantar fascia having lost its role of stabilizing the foot and maintaining the internal arch, the sole will then make up for this deficiency by means of internal arch support and heel compensation.

The support of the internal arch does not have the same function according to the morphotype of feet. In a valgus foot, this support will act as a brake on the valgising push, while in a hollow foot, it will act as a load distribution by increasing the support surface.

Heel compensation should improve the stability of the heel. The preference will go on a kind of two-component with a hard material to have an anti-valgisation effect and a soft material to obtain an analgesic effect.

Note that the soft silicone gel heels, which are sold in pharmacies, are counterproductive, because they will increase the instability and the work of the aponeurosis which are responsible for the aponeurosis. 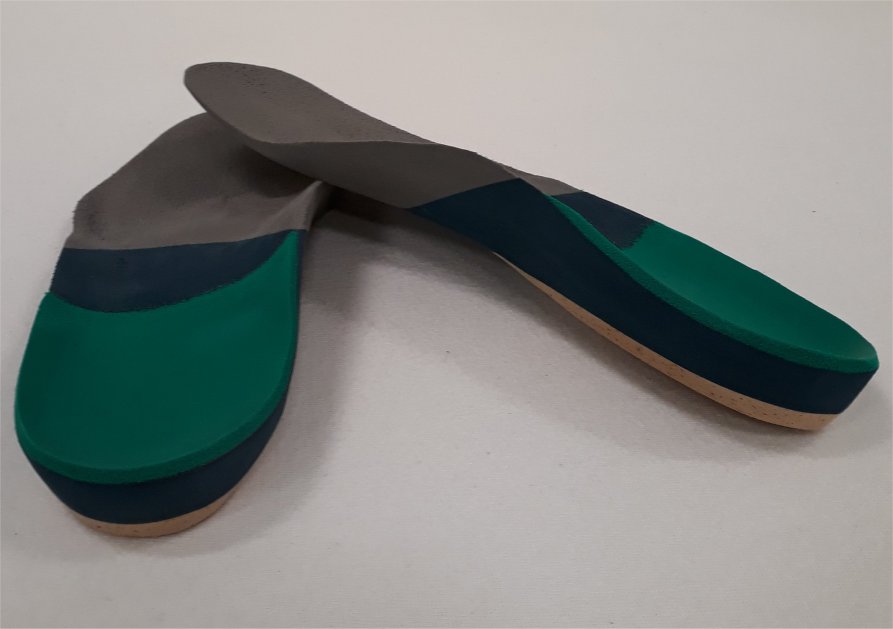 The podiatrist must then assess the necessary corrections to be made at the level of the sole so that the patient is relieved as quickly as possible.

The role of the podiatrist does not stop at the simple making of insoles. He must inform the patient by giving him advice on putting on shoes, since he knows very well that with the soles, he is dependent on shoes. Like soft heels, shoes without support will create instability, and also maintain inflammation.

There are other therapeutic aids to treat plantar fasciitis (physiotherapy, anti-inflammatory drugs, infiltrations, etc.) that will vary depending on the stage of inflammation. This is why it may seem more judicious to speak of complementarity in the treatments, because the “miracle” treatment does not exist (the healing time can take several months).

However, a treatment with insoles adapted as a first resort has the advantage of responding to the mechanical problem of the pathology and of being non-invasive.

ADAPTATION OF THE SOLE IN THE SANDALS